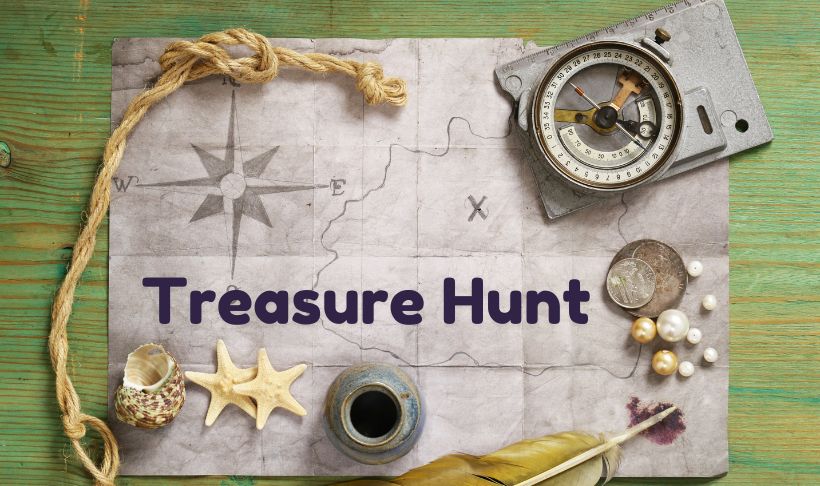 One of the most popular printable party games for kids currently, treasure hunt, also known as a scavenger hunt, is an activity that is not only fun but also educational. It is a group activity wherein children have to find a treasure previously hidden by their parents or organizers. To find the hidden treasure, the young players must solve puzzles, overcome various challenges, and search relentlessly until the beaming prize shines brightly.

Several clues are strategically provided to ensure that each level of finding the ultimate hiding place becomes manageable and yet tough. A scavenger hunt is a game that cheers children up, induces thrill and adrenaline, and nourishes critical thinking abilities. It can be played both indoors and outdoors and is an excellent activity for the overall development of children between the ages of three to six. Now let us see how you can organize a treasure hunt for your young munchkins at home.

As already mentioned, a treasure hunt can be played both indoors and outdoors. However, an outdoor space is much more enjoyable with a lot of scope for adventure. Some of the fundamental things you will need to host a fun, and interactive scavenger hunt are –

It is noteworthy to remember that the ‘treasure’ does not have to be anything extraordinary. A colourful ball or a bottle works equally fine.

How to Conduct A Treasure Hunt

It is important to begin by putting clues and the prize out in the open. You can use pictures or written instructions to leave clues. Eventually, the wealth will be found by following the trail of clues left by the previous explorers.

Young children between the ages of three to six might find it difficult to adapt to the nitty-gritty of treasure hunt. Finding clues might be challenging for them, so it is imperative to simplify the game.

Now that we know the rudimentary aspects of conducting a treasure hunt let us look at the many benefits of the game.

Treasure hunt is an invigorating game and has countless benefits for the overall development of a child. They can learn soft skills as well as quick thinking through a scavenger hunt.

One of the first things that children can learn from playing treasure hunt is patience. As treasure hunts are time-consuming and require calmness to unravel the clues, your child learns to be patient automatically.

In case the treasure hunt is played by a group of young children, then teamwork is an intrinsic trait that all of them will learn. A scavenger mandates that children work together to solve puzzles and overcome obstacles, allowing them to interact, build connections, and work compatibly in a group setting.

In addition to critical thinking capacities and analytical skills, a treasure hunt is a game that requires communication when played in groups. As such, young children can learn the precious aptitude of interacting with one another and polish their social skills for overall personality development.

A treasure hunt is an activity that compels children to remain completely focused. Following instructions, navigating spaces, reading and understanding the clues teach them the necessary life skill of listening, concentrating, and being dedicated to a specific task.

Another tangible benefit that your children can reap by playing treasure hunt is exercise and staying healthy. Nowadays, it is an unfortunate fact that an active lifestyle through outdoor games has vanished from the lives of young children. An exciting yet educational game like treasure will undoubtedly, compel them to get out of their rooms and bask in an outdoorsy adventure.

Cracking clues and solving puzzles is a gratifying experience and can induce self-confidence among children. By deciphering the hints and finding the treasure, your child will probably begin to think highly of themselves, and with proper guidance, you can channel that confidence in a positive way.

A scavenger hunt compels children to put on their thinking caps and go into an imaginary realm where childhood fantasies come alive. As the activity allows children to use their imagination to solve puzzles, it is undeniable that there is immediate nourishment of their creative sides.

So, there we have it, a comprehensive overview on conducting a treasure hunt for children between the ages of three and six. Besides being fun and engaging, treasure hunts have several benefits for young minds. Therefore, parents need to plan a treasure hunt time and again for their kids to experience a different kind of fun task.